Fieldpost
is a column with my personal observations in the field of sculpture.
I’m an art critic for magazines and a newspaper and correspondent
for Sculpture Network in The Netherlands. In Field Post, I’m happy
to share my experiences and thoughts with you.

dOCUMENTA13: The revelations of things
by Anne Berk

dOCUMENTA13 in Kassel looks like a modern Wunderkammer, with a great variety of objects:
contemporary and ancient, art objects as well as natural elements. In this virtual, digital world, curator
Carolyn Christoph Bakargiev invites us to surrender to our senses, to reconnect with nature and the other
creatures with whom we share the planet.
Bakargiev acknowledges the merits of the physical (art) object as tool for reflection and embodiment. 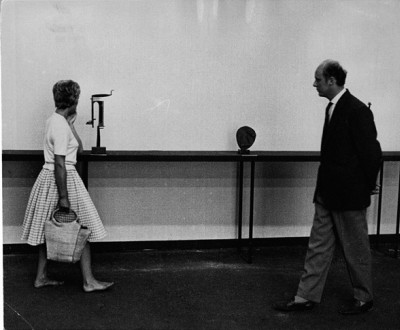 When you look closely to an artwork,
it becomes, as in meditation,
an ever more abstract exercise,
a thinking and imagining,.. a viscous experience
that allows the mind to merge with matter,
and slowly, possibly, to see the world,
not from the point of view of the detached subject,
but from within so-called objects and outward:
I am the ball, the ball is me.

Experiencing an object
By dedicating a complete hall to two photographs and the three sculptures that are depicted, the Amerian
born, Bulgarian-Italian curator Carolyn Christoph Bakargiev makes a statement. The Documenta draws
crowds of people – in 2007 more then 700.000 – But what do they experience, when they look at this
display of physical THINGS?
On one of the photos, we see a man and a woman, looking at the metal sculptures of Julio González, each
in their own way. While he’s caught in passing, hands on his back, in an easy stroll, she withholds her
step and brings her hand to her mouth in amazement. The woman doesn’t simply look and classify, she
responds with her whole body, being there, connected to the world.
This photo was taken in 1959 during Documenta2. This contemporary art show was initiated by Arnold
Bode, from the deeply felt need for something positive after the destructive war period. By selecting this
photo, Bakargiev puts herself in perspective as a curator, she but also points to the crucial relation
between things and people. The value of an exhibition lies precisely in this interaction of the object with
the viewer.

As the daughter of an archaeologist, Bakargiev is aware that material objects are a source of knowledge.
Artefacts reveal the way of living and the values of a society in a specific time. That holds true for
contemporary art objects as well. But you can also look at natural things, and contemplate our relation to
nature.
Things are created (or found) by people, and their meaning is defined through our relationship with them.
We cherish them, buy them, hand them over to next generations, recycle them, lose them, destroy them
or throw them away. They are part of our lives and loaded with emotions and memories.
Things are loaded with hidden meanings, waiting to be unravelled. But they don’t reveal their secrets at

first glance. Their appearance is not always that spectacular.
Instead of analysing the object theoretically, Bakargiev invites you to engage with
the object, a bodily experience that involves all your senses. Bakargiev is an
adherent of Merleau-Ponty, who emphasized the body, and not consciousness, a
the source of knowledge. He invented the word sense-experience (sentir means feeling
in French). Look with an open mind, empathise and wonder. And when you do so,
the show unfolds like the Da Vinci Code. To revive an object
Take the video of the flute player Raptor’s Rapture of Jennifer Allora (1974, USA) and Guillermo Calzadilla
(1971, Cuba). Initially I felt quite uncomfortable, while listening in the in the loaded darkness of the
Weinberg Bunker. The musician blew on top of her breath, attempting to play the instrument in several
ways, but the sound appeared quite crude to me. However, the vulture that was sitting next to her on a
tree trunk, listened attentively, as if the rasping sound revived some ancient memories. And it was his
acuity persuaded me to stay. When I learned that this flute, which is made of bird bone, is the oldest
musical instrument we know today, I was deeply moved. It was unearthed just recently, in 2009, at the
Hohle Fels cave in southern Germany and now, after an inconceivable time span of 35.000 years it was
brought to life again by the breath of the flute player. Just imagine!
This flute is the tangible proof that humans were not only driven by pure survival. From the dawn of
history, we felt the need to express themselves and communicate with objects we call art. 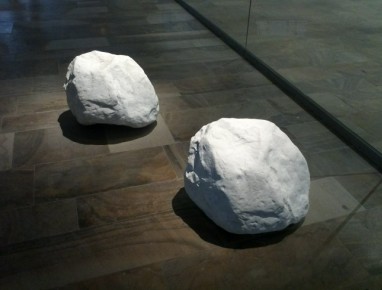 To recreate an object
Essere Fiume of Guiseppe Penone (1947, IT) in the Friedericianum, is another key work. The two rough
stones don’t seem very spectacular. But when you look more closely, you discover that they are similar in
shape, and you realize that this is impossible in nature. Penone realizes he can’t surpass nature. He
humbly confines himself to make an exact copy in marble, as a tribute to the shaping forces of nature. In
the words of Penone:
The river is gifted with a marvellous agility and its flowing is continuous, insistent, tactile and eternal.
The river transports the mountain and is the vehicle of the mountain. The rock becomes detached from
the mountain and changes in its matter and structure. The blows of the chisel, the scoop, the drill and
sandpaper are all tools of the river. It is being river that is the true sculpture of stone. It reenters nature
and is cosmic heritage, a pure creation.
When he was in his twenties, Penone made a cast of his hand, touching a tree trunk. Years later, the
bronze hand had fused with the tree. Nature reveals us who we are. We are part of nature, although we
think we stand above it, Penone told me in an interview.
But in our increasingly technological society, this is something we are inclined to forget. To bury objects
Apes used sticks to obtain their food, but people developed a vast array of tools to satisfy their needs,
from stone axes and ceramic bowls to cloths, cars and computers. Things could be produced more and
more efficiently and became available for the masses. Nowadays, we live in a manmade environment. We
produce an innumerable amount of things, and not just to survive. In our growth economy producing and
consuming becomes an end in itself.
With his Doing Nothing Garden the Chinese artist Song Dong (1966) questions this development. His
enigmatic hill in the Karlsaue Park turns out to be a burial place for things. In particular the stuff that his
mother, Mrs. Zhao, accumulated in the sixty years of her life. In 2005, Song Dong carefully arranged her
vast array of domestic objects in the MOMA in New York, with the title Waste-Not. In times of scarcity,
this was a prescription, but since China surrendered to consumer culture, this has become forgotten
virtue.
We are haunted by things. We shop until we drop, spend our life acquiring things, but does that make us
happy? Song Dong buries them and transforms them into nature, a grassy hill with flowers where you can
relax. Do nothing. Just live. 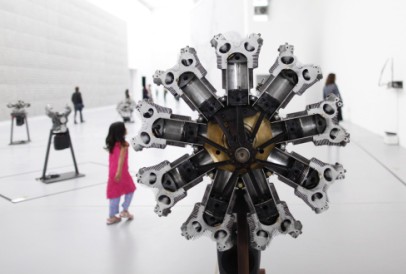 To dissect an object
In the Documenta Halle, the visitor is overwhelmed by the noise of running engines. Germany takes pride
in its car industry (dOCUMENTA13 was sponsored by Volkswagen), and indeed, the perfection of the
moving engines is awe inspiring. Existing engines were dissected, revealing the throbbing heart of the
car, with its sensually moving pistons, that thrill the male visitors in particular. There’s no object that is
so charged with human emotions as the car. The car is a fetish. It physically envelopes us, is literally an
extension of our body that multiplies our reach.
The car is the embodiment of our idea of individual freedom, but in reality we spend many hours in traffic
jams. Thousands of lives are lost in accidents. Not speak of fuel shortage, Co2 emissions, and climate
change. There certainly is a price to pay. The German artist Thomas Bayrle, aged 75, witnessed the rise
of mass production, and the phenomenal proliferation of the car that went along with it. What will the
world look like when this expansion continues? Bayrle is frightened by the prospect. Those who listen
carefully to the moving engines will hear a faint whispering: Lord, save our souls, pray for us, that reveals
his underlying message of a Carmageddon. 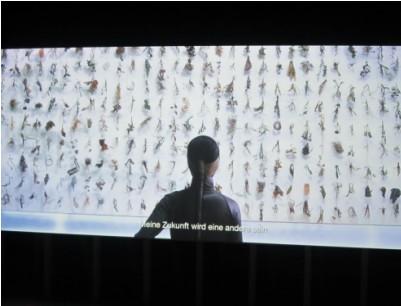 To collect the remains of an object
The Korean artists MOON Kyungwon (1969) and JEON Joonho (1969) take this line further and imagine life
in the 21st century. In their anguished film El fin del mundo they outline a post-apocalyptic society, in
which the human race is almost wiped out. The land is flooded and polluted by radioactivity. Two
surviving artists hope to get admission to the only safe place, a domed city that is run by a fictional
cooperation. But to succeed, they have to research and collect the remnants of nature and of culture. It
made me sad, watching the isolated woman in her protected clothing, collecting the leftovers of plants.
Hopefully El fin del mondo will trigger people to re-examine and adapt their behaviour, so that this
Doomsday won’t come true. 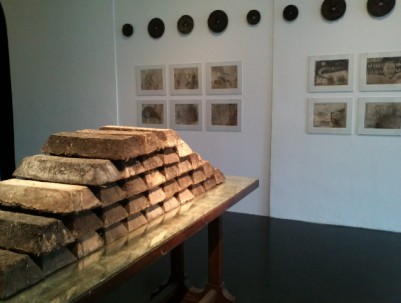 To transform an object
When she designs a new currency, the Soil-erg, Claire Pentecost (USA, 1956) makes a clear statement.
We need to value soil. We depend on the earth for our food. Pentecost worries about the way we produce
food nowadays. She transforms gold bars into earth, quoting investor Warren Buffet: I guarantee, that
within hundred years, soil will be more expensive than gold.
The earth bars made me think of Midas. You can’t eat gold, as king Midas experienced. Once he was able
to change everything into gold, he died of starvation. The story of Midas is a metaphor about materialism
and greed.
We need a different system of values, that is not driven by money as a goal in it self. That is de message

I got from experiencing the objects in Documenta13.
Surely, curator Carolyn Christoph Bakargiev doesn’t pretend to have the answers to problems such as ‘the
growing difference between the wealthy and the poor, and the subjugation of economy, society, and
nature to financial systems, connected to advances in computing power rather than the production of
material goods’. She acknowledges that there are no simple solutions. But she encourages us to keep
searching for them, using the physical art object as tool for reflection and embodiment.
In a digital world, Bakargiev invites us to surrender to our senses, to reconnect with nature and the other
creatures with whom we share the planet.

The artwork, an ambiguous entity,
performs the task of the transitional object,
a prop for an exercise of being in one place and time,
and not in another,just here, with this food,
these animals, these people, poorer, and richer too.